Pep Guardiola has defended his team selection after Leeds stun the league leaders. 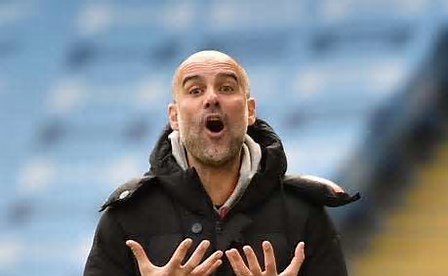 Two Stuart Dallas strikes, late in both halves, either side of Ferran Torres’s equaliser for City earnt Leeds United a memorable victory at the Etihad.

Leeds produced a disciplined defensive performance and still had enough flair in their side to win late on, despite playing over half the match with just 10-men after Cooper’s red card late in the first half.

It was a frustrating day for Guardiola’s men who had an incredible 29 shots on the Leeds goal without really testing Meslier too much.

However, the victory for Leeds was somewhat aided by Manchester City’s Champions League quarter-final second leg clash against Borussia Dortmund on Wednesday, with Guardiola making seven changes to his side in preparation for Dortmund.

Kevin de Bruyne, Illkay Gundogan, Phil Foden, Riyad Mahrez and Rodri all were named as substitutes with Sergio Aguero not even in the squad.

However, despite the defeat, Guardiola defended his team selection, saying, ‘I don’t have any regrets about the selection. If I did not trust them, they would not play.’

Whether Guardiola’s decision to rotate his squad was the correct one, will be revealed in the Champions League on Wednesday.