Guardiola lauds his side for ‘building history’ after City beat Dortmund

Guardiola lauded his side for ‘building history’, as goals from Foden and Mahrez defeated Dortmund and sent City into the semi-finals. 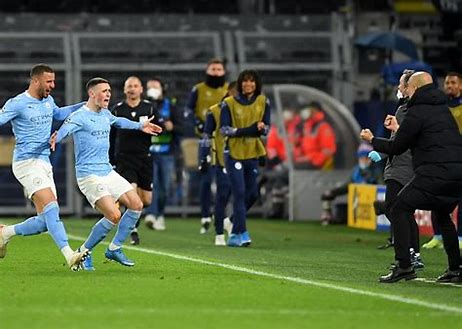 Foden's goal sparked a big celebrations for City as he ran over to Guardiola.

Pep Guardiola has lauded his side for ‘building history’, as Foden and Mahrez both scored to send City into the Champions League semi-final for the first time under Guardiola.

It looked set to be another Champions League quarter-final disappointment for the Cityzens with Dortmund going ahead after just 15 minutes, with Jude Bellingham scoring a peach of a goal.

However, Manchester City responded through a Riyad Mahrez penalty and a Phil Foden cracker to win 2-1 on the night and 4-2 on aggregate.

Manchester City had been eliminated at the quarter-final stage for the past three seasons, however, City’s second-half comeback versus Dortmund kept Guardiola’s men on course for a historic quadruple.

The manager said: “He’s always creating something – two important goals and he has helped us in the semi-final – in this quarter-final he was the most important player. It is the second time in the semi-finals so it is not history in the club, but we start to build it.

“We were brilliant except the first minutes where they were good. I’m incredibly happy to be in the semi‑finals, to be one of the best four teams in Europe, to be against big, strong teams and we will try to be good. We break this bridge from quarter-finals to semi-finals.”

Manchester City will look to build even more history against PSG in the semi-final.