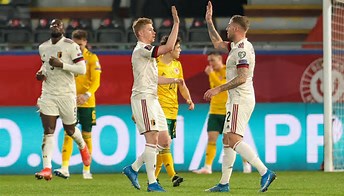 The international break has provided a rest for many, however, City’s top stars have continued to shine for their countries.

Kevin De Bruyne scored an excellent goal as Belgium came from behind to beat Wales 3-1 in their first World Cup qualifier. The Belgian midfielder showed his class once again against the Czech Republic by assisting Romelu Lukaku’s equaliser, which came 10 minutes after the hosts opened the scoring.

Raheem Sterling scored one of England’s five goals against San Marino on Thursday evening as they cruised to victory. The 26-year-old also started against Albania on Sunday as England won 2-0.

City’s 20-year-old star came off the bench for England against San Marino, assisting Ollie Watkins. Against Albania, Foden started and played 81 minutes against Albania on Sunday before being substituted.

Kyle Walker started and played the full 90 minutes against Albania for England on Sunday.

John Stones’s revival continued at international level and the Englishman started both matches against San Marino and Albania, keeping a clean sheet in both games.

Gundogan has carried his impressive form at club-level onto the international stage, with the German scoring in his country’s 3-0 win over Iceland and earning his 44th cap for Germany against Romania.

Ruben Dias kept a clean sheet in Portugal’s victory over Azerbaijan and was involved in a thrilling 2-2 draw with Serbia in Portugal’s other match.

Bernardo Silva started both games for Portugal and got an assist, setting up Diogo Jota against Serbia.

Ferran Torres started against Greece for Spain in a 1-1 draw and scored the equaliser in Spain’s comeback victory against Georgia.

Eric Garcia started in both of Spain’s qualifying matches.

Rodri played the full 90 minutes against Greece for Spain but he was an unused substitute in their victory over Georgia.

Zack Steffen played the entirety of the United States’ victory over Northern Ireland in an international friendly, taking his tally of caps to 21.

Zinchenko started and played in both of Ukraine’s 1-1 draws against France and Finland.