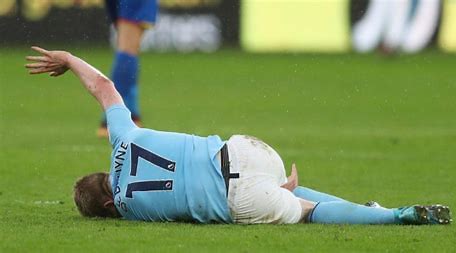 De Bruyne was substituted in the second half of City's 2-0 victory over Aston Villa.

Manchester City midfielder Kevin De Bruyne has suffered a hamstring injury and will be sidelined for four to six weeks.

The 29-year-old suffered the injury in Wednesday’s win against Aston Villa.

The Belgian midfielder was replaced in the second half and looked in discomfort as he took his place on the bench.

“The doctor said after reviewing the scan Kevin will be out for four to six weeks. It’s a big blow, but we have to move forward,” said Guardiola.

“I’m not saying anything that anyone doesn’t know – it is unfortunate for him and for us and we have to find a solution because everyone in their own life is struggling in the situation we are living in and we have to adapt.”

Manchester City are unbeaten in their last 16 matches and are currently second in the Premier League.

Guardiola said his players are having to play too many matches and are picking up injuries as a result.

“To demand they are fit for 11 months, playing every three days, is impossible,” said the 50-year-old.

“With this amount of competitions, the body says ‘it’s enough’. The players don’t want to get injured but it’s no secret.

“When we demand five substitutions, it’s for this reason. Why can we do it in the FA Cup but not the others? I’m not just saying it because it’s Kevin, it’s too many games and competitions and in the end the players suffer.”