Manchester City have confirmed that talismanic midfielder Kevin De Bruyne will miss out on their trip to Aston Villa on Wednesday. 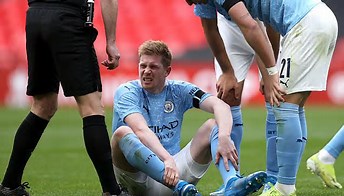 Manchester City’s Belgian playmaker Kevin De Bruyne will be absent for their trip to Villa Park on Wednesday after suffering an ankle injury in City’s FA Cup semi-final defeat to Chelsea.

The midfielder was substituted after 47 minutes and looked frustrated as he limped off the pitch after landing awkwardly on his ankle.

De Bruyne was initially treated on the pitch before he was replaced by Phil Foden, with City going on to crash out of the FA Cup courtesy of Hakim Ziyech’s goal.

Pep Guardiola said it was too early to comment on the severity of the injury after the match.

However, Manchester City have now confirmed that the Belgium midfielder suffered an injury to his right foot and ankle and has been ruled out of the game against Villa, but say the full extent of the problem is not yet known.

De Bruyne is now a doubt for Manchester City’s EFL Cup final against managerless Tottenham on 25 April along with Spurs striker, Harry Kane.

The Belgium international missed five matches because of a hamstring issue, which he sustained in January and he has now suffered another injury problem which could impact his availability for City’s remaining six Premier League games, and their challenge for two cup competitions.