Kylian Mbappe on the bench for PSG

Kylian Mbappe is only fit enough for the bench as City aim to reach their first European final in 51 years. 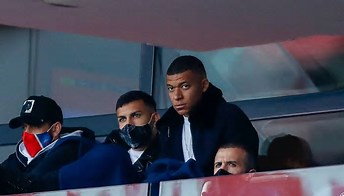 Kylian Mbappe has recovered from a calf injury to return to the PSG squad, however, he starts on the bench for their crunch semi-final tie versus City.

In his absence, Mauro Icardi is given the opportunity to lead the line for the French champions, who are looking to overcome a 2-1 deficit from the first leg.

The world’s most expensive player, Neymar, will be looking to seize the chance to shine for the visitors without Mbappe to steal the limelight.

In total, Pochettino has made just three changes from the first leg, with Diallo and Herrera also coming into the side.

Manchester City are looking to end their 51-year wait for a European final and Guardiola has named a strong side after resting some key players in City’s 2-0 win over Palace at the weekend.

Guardiola goes back to what has been his first-choice defence this season, as Kyle Walker, John Stones, Ruben Dias and Oleksandr Zinchenko return to the starting line-up.

Fernandinho captains the side and alongside him in midfield are Illkay Gundogan and Bernardo Silva.

Sergio Aguero scored an excellent goal and played 90 minutes at the weekend, however, Guardiola opts for starting without a recognised striker again, with the front three consisting of De Bruyne, Foden and Mahrez.

De Bruyne and Mahrez were the scorers of City’s crucial away goals in the first leg.