Looks like Aguero will be staying at Manchester City next season 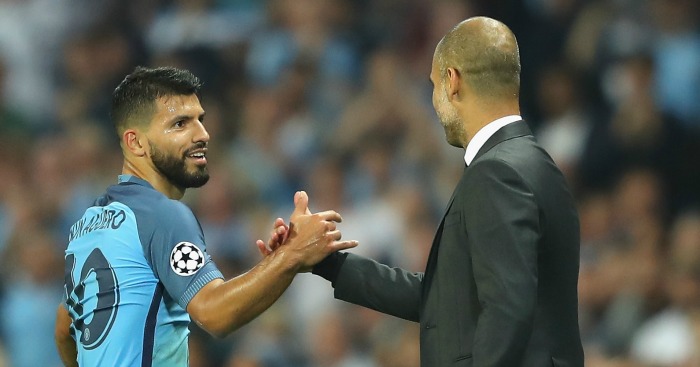 Manchester City manager Pep Guardiola was inundated with questions about the future of Sergio Aguero at the end of last season, with many outlets suggesting the Argentinean international could depart the Etihad Stadium. However, Guardiola always denied such a claim and it appears he was telling the truth considering the Sky Blues legend remains at the club ahead of the 2018/19 season.

Aguero, who has been at City since his 2011-move from Atletico Madrid, was the club’s top scorer last season, netting 21 goals in only 22 Premier League starts. The 30-year-old scored more than Raheem Sterling in fewer games but came away with little praise for his antics. He finally made the PFA Team of the Year for his antics last season, but media outlets still believed Guardiola would sell him. Why?

City have a club legend averaging close to a goal a game in the Premier League, so the Sky Blues boss will never let him go unless he was causing problems behind the scenes. And given Aguero revealed in June that his relationship with Guardiola is good and that he has no plans to leave the club this summer, the pair should continue working for at least another season.

The Argentine’s contract expires in 2020 and the striker has openly admitted he could return to his homeland when his deal is up at the Etihad. He’s been in Manchester for seven years, scoring a total of 199 goals in 292 games in all competitions and will play an important role in the squad next season.

Gabriel Jesus often replaced Aguero in the starting lineup last season and will be prominent in the starting eleven this coming campaign, but there’s still a place for the fan favourite. He’s scored 20 or more league goals in each of the last four seasons and only Harry Kane (105) has scored more than Aguero (91) during this period.

With the South American forward lacking the same athleticism and industry as Jesus, it’s of little surprise that Guardiola will occasionally rest Aguero, but his incredible goalscoring record means he’s always a threat when on the pitch. His advancing age will likely mean more appearances from the bench next season, but Aguero can still find the net in limited time.

Without him in the squad, City are short on depth in attack. Jesus, Aguero and Sterling at likely to be the first-team options up front for next season. It may seem obvious that Aguero is staying at the Etihad, but that wasn’t always the case earlier in the summer. Fans will be delighted the rumours have died down now.

Gunn and Zinchenko could be moved on permanently by Man City this summer
Zinchenko to stay at Manchester City but is he good enough?