Cheltenham Town came within nine minutes of one of the biggest FA Cup shocks ever but City struck late to reach the next round. 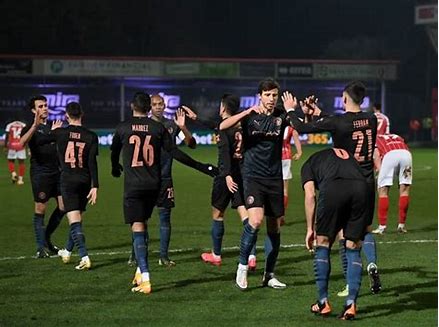 Manchester City travelled to the Jonny-Rocks stadium in their first ever encounter with Cheltenham Town.

The Blues were second in the Premier League and 72 places above their hosts.

Manchester City had beaten Birmingham 3-0 in the third round of the competition to reach the fourth round.

On the other hand Cheltenham needed extra-time to beat Mansfield in their third round tie.

Man City had reached the fifth round of the competition in each of their last five seasons.

Pep Guardiola was without Kevin De Bruyne, Sergio Aguero and Kyle Walker for this tie and made 10 changes from the side that beat Aston Villa 2-0 on Wednesday.

Guardiola also offered a chance to impress for the ever-erratic Benjamin Mendy, who has yet to show his full capabilities.

Michael Duff’s side are challenging for promotion in League Two and started with their strongest side.

With 72 places separating the two sides, Duff’s team knew a victory would be one of the biggest shocks in recent FA Cup history.

Manchester City almost managed to go 1-0 up within 25 seconds, as Mahrez picked out Jesus, who was denied by Josh Griffiths.

It was a sign of things to come and it set the tone for a brilliant performance by the Cheltenham ‘keeper.

Benjamin Mendy was denied after 12 minutes by a stunning headed clearance by Ben Tozer, who was superb throughout for the League Two side.

Whilst many teams would just sit back, whenever Cheltenham got the ball they looked bright and tried to play.

Alfie May, in particular, troubled City on the break in the first half.

A fireworks display disrupted the first half and the game was paused for several minutes, meaning there were six minutes of first half stoppage time.

Manchester City failed to break down the Cheltenham defence and the Robins held out until half-time with the score 0-0.

After a battling first 45 minutes, many believed Cheltenham would struggle to cope in the second half and City would cruise to victory.

However, that was far from the truth.

Cheltenham pressed City even more in the second half and got a lot of joy from captain, Ben Tozer’s long throws.

In the 59th minute, Ben Tozer hurled one of these long throws into the box and a flick from Lloyd found Alfie May, who put Cheltenham on course for the unimaginable.

Manchester City looked stunned and they needed to find answers or they would have to face being dumped out of the cup.

It did not look as though City would do it and they looked slow in possession and lacked their usual rhythm.

If anyone was going to find a break through it was Manchester City’s best player, Phil Foden.

Foden had already created two fantastic oppurtunities for Mahrez and Jesus, who both failed to convert.

With 9 minutes remaining, Cheltenham were finally opened up by a delightful ball from Cancelo, who found Phil Foden, who duly tucked it past Griffiths.

It was a crucial goal for City and three minutes later, Gabriel Jesus redeemed himself for his earlier miss by putting the Blues ahead.

In stoppage time, Ferran Torres wrapped up the victory.

It was a poor performance for City, who were only saved by Foden’s brilliance; but, full credit to Cheltenham, who did themselves proud.

Foden is in a ‘great moment’ – Guardiola

“Foden is in a great moment and with great confidence,”

“He is clinical in front of goal and he had a similar chance to the goal we scored at [Chelsea’s] Stamford Bridge – he is playing really well.”

The City manager suggested he was confident in the players he put out on the pitch.

“I didn’t have regrets even when we were 1-0 down, we had clear chances from the first minute,” he added.

“When they take advantage it gets complicated, but we got it to 1-1 and it was tight. We came here with humility and had the quality to make the difference.”

Manchester City return to league action on Wednesday when they travel to the Hawthorns to face Sam Allardyce’s West Brom.