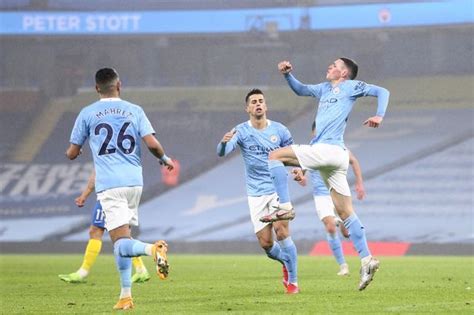 The Citizens faced Graham Potter’s team, who have struggled in the Premier League this season.

Guardiola’s side went into the game on the back of a 3-0 FA Cup victory over Birmingham.

City made 4 changes from that victory, as Ederson, Stones, Zinchenko and Gundogan, all came back into the side.

That meant that City once again played without a recognized with No.9, with Guardiola opting for a more fluid and inter-changeable attacking force.

Brighton made 7 changes from the team that was taken to penalties by League Two, Newport County, in the FA Cup.

Manchester City had won all of their previous Premier League encounters with Brighton.

City, understandably, dominated from the start, with the Blues enjoying all of the possession and chances.

Kevin De Bruyne, who was operating as a No.9 again, was the beating heart of all of City’s moves, with the Belgium midfielder providing a classy performance.

He had a shot saved from Sanchez from a tight angle and then released Mahrez, who could only shoot wide.

Manchester City had plenty of opportunities to score in the first half, however, it looked as though Brighton would hold on until half-time, with the score deadlocked.

However, one minute until the break, De Bruyne found Phil Foden, who brilliantly evaded the Brighton defenders before shooting past Sanchez.

After the break, City had multiple chances to extend their lead, with Mahrez shooting inches wide, Gundogan being denied by Sanchez and Bernardo Silva hitting the crossbar.

However, Brighton grew into the game in the second half, and Alexis Mac Allister had a fine chance to equalise for Brighton but shot over the crossbar.

Brighton, in truth, never really looked like scoring and lacked a clinical edge in front of goal, despite top scorer, Maupay, coming on with 20 minutes left.

City had a golden chance to wrap things up, in stoppage time, after De Bruyne won a penalty.

Raheem Sterling stepped up to double City’s advantage but missed.

It wasn’t a vintage display by City but it was an important win as they look to apply the pressure on Manchester United and Liverpool.

‘It definitely feels we are back to our best’

Manchester City manager Pep Guardiola told BBC Sport: “We knew how tough it would be. Brighton had a good mentality to play.

“We had a really good first half and had chances. After we missed a really clear chance in the second half, they were better.

“We need to win these sort of games. It is a good lesson for us. Every game will be like this.

“Phil Foden is 20 years old. Look at the stats, the amount of games, the assists compared to the bigger stars in football. He can play both sides, in the middle as a false nine. He is so clever in front of goal. That is why he deserves to play.”

Manchester City match-winner Phil Foden said: “It definitely feels like we’re back to our best. We’ve taken confidence from the last few results.

“We could have done better but overall I’m very proud of the team. It’s a great result.

“Brighton defended really well and had a good gameplan. To get the goal before half-time was really important. It ended up as the winning goal so I’m delighted.”

Manchester City will be at home again when they host Crystal Palace at the Etihad on Sunday.