Jesus scored the winner, as Manchester City overcame Sheffield United to expand their lead at the top of the table. 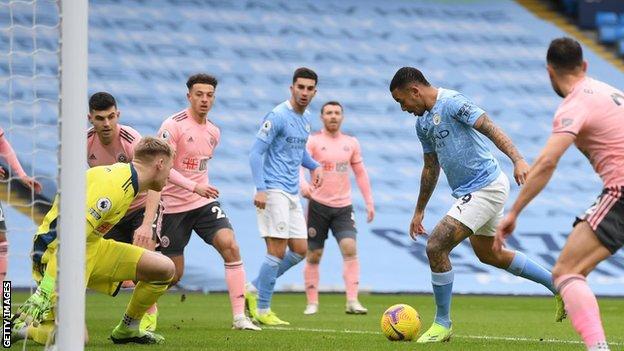 Manchester City hosted relegation strugglers, Sheffield United, aiming to extend their lead at the top of the table to four points.

A win for Manchester City would not only extend their lead at the top but also extend their unbeaten run to 19 matches.

The Blades have had a disappointing season and were rock bottom of the table going into the game but they were boosted by four wins in their last five games in all competitions.

Manchester City were unbeaten in their past 32 league home matches against sides starting the day in the relegation zone.

Manchester City were once again without Sergio Aguero, who is still self-isolating after a positive Covid-19 test.

Kevin De Bruyne was also out for the hosts, with the Belgian midfielder recovering from a hamstring injury.

Nathan Ake was also an injury absentee for the Premier League leaders.

Sheffield United made four changes from their stunning win over Manchester United, with Egan, Bogle, Burke and Brewster returning.

Jagielka, Bryan, McGoldrick and Sharp all dropped to the bench.

Sheffield United had not scored an away goal against Manchester City for 20 years.

It was always going to be difficult for Sheffield United, but their task was made even harder by City taking the lead just nine minutes into the match.

The goal was a poor one to concede for Sheffield United, as a long pass forward was won by Ferran Torres, who breezed past the Sheffield united defenders before squaring it to Jesus.

Gabriel Jesus had been having a difficult season, however, he ended his goal drought with a clinical finish to put City ahead.

Manchester City almost capitalised on another mistake by Sheffield United with a loose Norwood header finding Bernardo Silva, who saw his instinctive header saved by Ramsdale.

That Bernardo Silva chance proved to be one of few chances for City, despite the Blues dominating the match.

In fact, a somewhat toothless, City failed to have another shot on target in thee remainder of the half.

Sheffield United never really troubled City, with their best opening in the half resulting in Rhian Brewster shooting straight at Ederson.

In all truth, it was an uneventful half of football, with City happy to just keep the ball, rather than to try and double their advantage.

The second half continued in much of the same pattern as the first half, with City still dominating possession but still not creating any clear-cut openings.

Jayden Bogle had a rare chance for an equaliser on the hour mark, but he snatched at the chance and sent it way off target.

Manchester City were always in control and Ramsdale made two fabulous saves in quick succesion to deny a City second.

Ramsdale first saved from Zinchenko before denying Laporte from the following corner.

John Fleck had the Blades’ best chance but fired narrowly wide from outside the box.

Manchester City were far from their best but nevertheless dominated and got an excellent victory.

“So difficult [to] win, like we knew it [would be], an incredibly huge victory for us.

“It’s amazing after this run of victories in a row, 12 in all competitions, still the players run and fight like animals.

“We concede one [chance] at the end, it was dangerous, but it’s so difficult an opponent. We knew it.

“Every time we play against them, we struggle a lot but we concede few [chances] and this is important.”

“With these weather conditions when we woke up, we said, ‘Today, forget about it, it will be one of the toughest games of the season.’ .

“The team was incredibly committed, didn’t make mistakes, they were so focused in the second balls and long balls.

“We won a lot of duels and we lacked a little bit to create chances but it’s so difficult because they defend [with] 10 players, defending all the space inside, they allow you to go outside so it’s not easy.

“That is the real proof that the Premier League is incredibly tough: the team at the bottom of the league is this team. This team showed that everything has to be won, there’s nothing given.”

Table-toppers, Manchester City are next in action on Wednesday when they face Burnley.