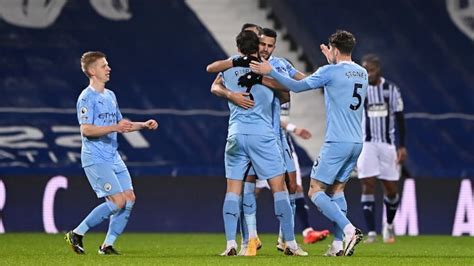 Manchester City eased past West Brom to climb to the top of the table with a five-star performance.

City were on a fine run of form and had won their past 10 consecutive matches in all competitions.

The last of those wins was a 3-1 victory against League Two Cheltenham on Sunday in the FA Cup fourth round.

West Bromwich Albion, in contrast, had won just one game under new boss, Sam Allardyce and were cemented in 19th place.

No team in Europe’s top five leagues had conceded as many goals at home as Allardyce’s West Brom.

Kevin De Bruyne picked up a hamstring injury and is set to be out for six weeks, so the Belgian missed out also.

Despite Aguero’s absence, Guardiola decided to start again without a recognised striker, with Gabriel Jesus being left on the bench.

Aymeric Laporte made his return from injury against Cheltenham but Guardiola opted for his first choice centre-back pairing of Stones and Dias.

Phil Foden was handed his 100th appearance for the club and Zinchenko replaced the injured Walker.

West Brom made three changes, as Furlong, Snodgrass and Grant all returned to the starting eleven.

Manchester City made a good start to the match and Phil Foden saw his shot pushed onto the post by Sam Johnstone with just three minutes played.

The Blues got their reward for their fast start, six minutes in, when Gundogan superbly controlled a ball over the top before swiveling and clipping the ball into the far corner.

Manchester City continued their pressure and doubled their lead, after 20 minutes, albeit in controversial circumstances.

Cancelo played the ball to Bernardo Silva, who held the ball up before laying it back to Cancelo, who placed the ball into the top corner.

However, the linesman had flagged Silva to be offside but because the referee did not blow his whistle, VAR overturned the decision and the goal stood.

The controversy was short-lived and City soon had a third, with Gundogan again driving a shot past Sam Johnstone.

The goal was the German’s seventh goal in eight Premier League appearances.

Manchester City added a fourth before half-time, with Sterling switching the ball to Mahrez, who cut inside and scored a trademark Mahrez goal – curling the ball into the far top corner.

In the second half, City continued their dominance and Raheem Sterling scored a fifth with a tap-in from a Mahrez pass.

However, in the end it was just five and it was a five-star performance from the Blues, who move to the top of the table.

‘We are fighting’ – Guardiola

“It was a good performance, good results in the game. We tried to put the players in the best condition, be humble enough and concentrate enough to do what we have to do and respect our opponents.

“We are at the end fighting because football is difficult. Everyone is solid and in this situation and this month we have the commitment and it’s so good.

“One or two days off and then prepare for Sheffield United. It’s the only way I know to be a manager – just think about Sheffield.”

Manchester City are next in action on Saturday when they could do West Brom a favour by beating Sheffield United.