Pep Guardiola blasts VAR after controversial decision not to award City a penalty in their 5-2 victory over Southampton. 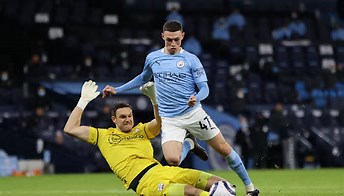 Manchester City manager Pep Guardiola says that ‘no one has given us anything in four-and-a-half years’ after Manchester City were denied a penalty in their 5-2 thrashing of Southampton.

The incident occurred with the score at 1-1 with Southampton goalkeeper Alex McCarthy appearing to foul Phil Foden.

Guardiola said that the on-field referee Jon Moss was not to blame and that VAR should’ve overturned the decision and awarded a penalty.

The Spaniard said, ‘Jon (Moss) cannot see it. It’s happened but VAR is there for this. I don’t understand it.

‘VAR is here to help. In these four-and-a-half-years, everything we have won, it’s for absolutely us. No-one has given us anything. Zero.

‘It’s just incredible the penalty was not given.’

The VAR match centre defended the decision by saying, ‘The on-field referee felt that Alex McCarthy got a slight touch on the ball, and VAR couldn’t see anything to disprove that.’

Manchester City midfielder Phil Foden, who was impeded by McCarthy, also said that it should’ve been given as a penalty.

He said that he thought it was ‘100 percent a penalty’.

‘I always try to stay on my feet but I would like to get rewarded with a fair decision.’

Manchester City and Phil Foden are next in action on Saturday when they face Fulham, aiming to get one of the remaining six wins that they need to win their third Premier League in four years.