Pep Guardiola has defended the match official, who asked Haaland for an autograph in the tunnel after City’s 2-1 victory over Dortmund. 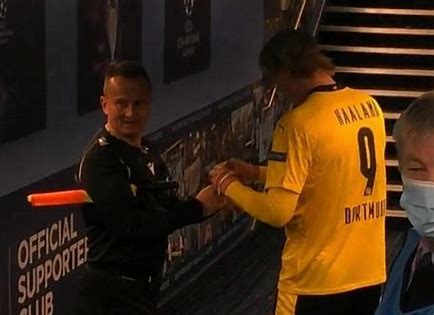 Manchester City boss Pep Guardiola defended the assistant referee after he appeared to get an autograph from Erling Haaland.

After Manchester City’s 2-1 victory over Borussia Dortmund, one of the Romanian assistant referees followed Haaland down the tunnel and appeared to get him to sign a red and yellow card that he produced from his pocket.

The bizarre incident was slammed by BT Sport pundits – Owen Hargreaves and Joleon Lescott, who described the official’s behaviour as ‘childish’.

Former Manchester United midfielder Hargreaves said: “They had a difficult first-half and they got a lot of things wrong.

“You can be a fan, but you can’t do that in front of the other players, it just doesn’t look right.”

Lescott added: “There’s never a right time for that, it just doesn’t bode well for the officials. It’s a childish thing to see.”

However, Guardiola was not too fussed after hearing what had happened, and told reporters: “They told me, I didn’t see it, maybe he’s a fan.

“Why not? The referees were brilliant, the game was not a problem. Not a penalty, the VAR said that.

“Maybe it was for his son or daughter.

“It happens but they did a good job, that’s all. Nothing happened.”