Manchester City will NOT be making any January signings insists Pep Guardiola. 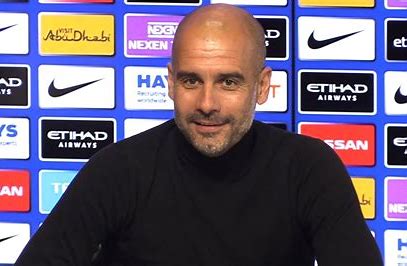 Manchester City manager, Pep Guardiola, has confirmed that the club will not be strengthening their squad in the January transfer window.

City are second in the Premier League with a game in hand on rivals, Manchester United and Liverpool.

The Blues have also progressed to the EFl Cup final, where they will face Tottenham Hotspur.

But, City had experienced a difficult and slow start to the season, with the Blues struggling in front of goal.

Manchester City’s goal-scoring woes were a result of injury-hit starts to the season for Sergio Aguero and Gabriel Jesus.

Guardiola’s alternatives when missing the duo have been to start Ferran Torres as a makeshift striker or to start De Bruyne or Sterling as a false nine.

So, despite City being in good form, rumors had been circulating about Guardiola making a move for a striker to aid City’s title charge.

However, Guardiola told beIN Sports, “We will not sign any deal during the winter transfer market.

“We did not discuss this, but we will end the season with the players that we have now.”

On the topic of the lack of a regular centre forward this season, Guardiola agreed it had at times been an issue, but he maintained City had enough quality to ensure it is not a major issue.

“This is one of our ways,” he said. “There were matches where we needed an attacker but at that time two of them were injured.

“One had been injured for a long time – Sergio Aguero. The other two had the coronavirus

“That’s why we sometimes play in this way, other times we are forced to do that because of a pressing need.

“It’s an alternative plan, which we can rely on given the talents we have in the various positions.”