Pep Guardiola has praised the rejuvenated Bernardo Silva after his performance at Goodison Park. 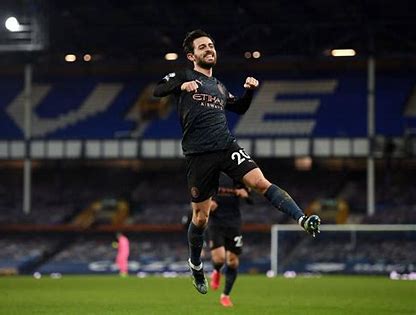 Bernardo Silva scored against Everton in another impressive performance by the Portuguese midfielder, who appears to be back to his best.

The victory took City ten points clear at the top of the table.

Bernardo Silva was one of the stand-out players in world football in the 2018/19 season, dazzling for City in the absence of Kevin De Bruyne.

However, the following season, with De Bruyne back in the side, Bernardo looked leggy and was hit hard by his FA ban.

What he felt was a joke with teammate and friend Benjamin Mendy was deemed to be unintentionally but racially offensive in a charge that accused him of bringing the game into disrepute.

Guardiola has stood by and continued to stand by the Portuguese footballer, but, it still affected Bernardo Silva and contributed to losing his place in the team.

However, this season, Bernardo looks to be back in his best form and whilst his performances have been slightly overshadowed by Illkay Gundogan’s, his manager knows how important he has been this season.

“Everything he does he does incredibly well. The year we won the second Premier League in a row he was unstoppable, he was an important player for us – and he is back.

“I am more than pleased because I said many times he is a lovely person. As a manager you always dream to have people like Bernardo; his mum and dad must be so proud about the son that they have.”