‘What a man, I am in love as a person’ – Guardiola on Aguero

Pep Guardiola raved about Sergio Aguero after City’s record scorer scored a stunning goal to move them a step closer to winning the league. 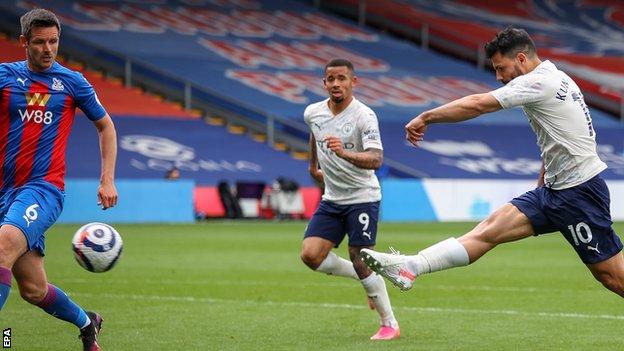 Pep Guardiola confessed his love for Manchester City’s club record goalscorer after he scored a stunning goal to set City on the brink of another Premier League title.

Aguero’s excellent finish, his 258th for the club, was followed up with a Ferran Torres strike to secure City victory against Roy Hodgson’s Crystal Palace.

The Spaniard said, “What a goal, what an action, what a player, what a man. I am incredibly delighted he is back.

“He is going to enjoy the last games. He showed with his goal what he has been and what he is. I am in love as a person He is an incredible guy.

“After the Champions League it is always tough but the players who didn’t play in Paris spoke on the grass and they did it perfectly.”

The Argentine striker has endured an injury-hit season, however, the City legend appears to be leaving the club with a bang before his imminent departure when his contract expires at the end of the season.

Whoever is lucky enough to sign the 32-year-old will be signing a top-class striker who is far from finished yet, as he demonstrated against Palace.

Aguero is determined to finish his City career strongly and said after the game, “I’m so happy because it has been a long time since I played 90 minutes and the goal was good because maybe we can win the Premier League.”

“Always I’m ready. I am feeling good. I always want the opportunity to play like today.”