Why are Manchester City so desperate to sign Jorginho from Napoli? 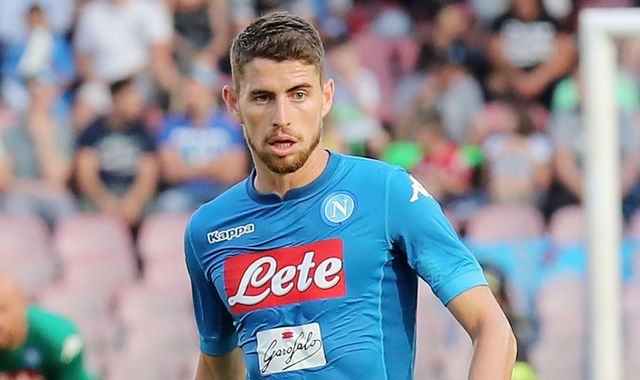 After Manchester City were reported to be in advanced talks with Napoli over Jorginho, president Aurelio De Laurentiis revealed on Sunday that they had rejected a £44m bid from the Sky Blues for the Italian international’s signature.

According to Sky Sports, City have been keen on Jorginho since April and could pay a lofty asking price to bring him to the Etihad Stadium this summer. With Kevin de Bruyne, David Silva, Fernandinho, Ilkay Gundogan and Fabian Delph as his options in midfield, why does Pep Guardiola want Jorginho so much?

A worthy replacement for Fernandinho

Guardiola has a lot of midfielders in the City squad, but there’s nobody who can replace Fernandinho. The Brazilian international protects the backline and snuffs out any danger in the middle of the park, while also threading attacks and retaining possession.

Signed from Shakhtar Donetsk in 2013, the 33-year-old has gone on to make 231 appearances in all competitions for City, winning two Premier League titles and three League Cups. Fernandinho was an unsung hero as the Sky Blues won the league title with 100 points last season. He averaged a tackle or interception every 26 minutes and made 88 passes-per-game with a 90% completion ratio. He’s contracted with City until 2020 but Fernandinho is undoubtedly in the eve of his career and will need a long-term replacement. Jorginho looks to be that play. For Napoli, he sits in the middle of a midfield trio, protecting the backline without the ball and pulling the strings when in possession.

Like Fernandinho, Jorginho excels at turning over possession, averaging a tackle or interception every 24 minutes in the Serie A, but combative qualities aren’t solely enough for a Guardiola side – players need to be comfortable on the ball with speed of thought and good improvisation.

Qualities in possession make him a perfect fit for City

Jorginho isn’t just a defensive midfielder, he’s a player with fantastic vision who seldom relinquished possession. The Italian international always has his head up, looking for runs from his teammates. He can pick out any pass from nearly any distance and has the ability to put chances on a plate for others – creating 49 chances in 33 Serie A games last season.

At Napoli, Jorginho thrived having willing runners from wide areas to pick out when he was in possession. He’ll enjoy playing for Manchester City for the same reason. Guardiola’s men play direct when turning over possession to catch their opponent on the counter, utilising the pace from Raheem Sterling, Leroy Sane and Gabriel Jesus to turn defence into attack in seconds. And given City build their attacks from the back, often racking up a lot of passes in the middle third, having a player comfortable receiving the ball in tight areas and being able to improvise is essential. Jorginho is exactly that.

He racked up 97 passes-per-game on average for Napoli in Serie A last season, completing 90% of them. Guardiola might have to pay top dollar to secure his signature this summer, but he may be worth it.